(Wilmington, DE – October 9, 2018) - Young Conaway Stargatt & Taylor, LLP is pleased to announce that Jack B. Jacobs will be returning to the firm as Senior Counsel in the firm’s Corporate section. He practiced corporate and business litigation at the firm from 1968 until 1985, when he became a Vice Chancellor of the Delaware Court of Chancery. He was then appointed as a Justice of the Delaware Supreme Court in 2003, and served in that role for 11 years before re-entering private practice in 2014.

“We are incredibly honored to welcome Jack back to Young Conaway after he has enjoyed such a distinguished judicial career,” said James L. Patton, Jr., Chairman of the Firm. “His contributions to the legal profession and incredible knowledge within the field are significant assets to our clients and our firm. We are grateful to again have him on our team.”

In his practice, Former Justice Jacobs advises companies and boards of directors on Delaware law issues, including fiduciary duties, and with respect to mergers and acquisitions. He also conducts special investigations on behalf of company boards, serves as an arbitrator and mediator, and advises on trial and appellate litigation strategy matters.

Former Justice Jacobs has served as an Adjunct Professor of Law at the law schools of New York University, Columbia University, Vanderbilt University and the University of Pennsylvania. He is a member of the American Law Institute and served as an advisor to the Restatement (3rd) of Restitution project, and currently, on its Principles of the Law, Compliance, Enforcement and Risk Management for Corporations, Nonprofits, and Other Organizations project. He is also a member of the Delaware and American Bar Associations, a fellow of the American Bar Foundation and an Advisory Board Member of the Rand Center for Corporate Ethics and Governance. Former Justice Jacobs also serves as a member of the Board of Advisors of the University of Pennsylvania Law School Institute for Law and Economics, and as a member of the advisory board of the Harvard Law School Program on Corporate Governance.

Former Justice Jacobs has participated in numerous corporate and securities law academic symposia and continuing legal education programs sponsored by various law schools and legal organizations. He also has been a guest lecturer at numerous American and foreign law schools, having delivered the Distinguished Jurist Lecture at the University of Pennsylvania Law School; the Regent’s Lecture in Residence at the UCLA Law School; and the William J. Brennan Lecture at NYU School of Law, and as the Distinguished Visiting Jurist at the Harvard Law School Corporate Governance Program.

He holds a J.D. from Harvard University, LL.D. (Hon.) from Widener University, and a B.A. from the University of Chicago.

The news of Former Justice Jacobs’ arrival to the firm comes on the heels of last week’s announcement that two Young Conaway attorneys were recently appointed to the bench. Kathaleen S. McCormick was confirmed as Vice Chancellor in the Court of Chancery and Craig A. Karsnitz was confirmed as a Judge on the Superior Court for Sussex County. 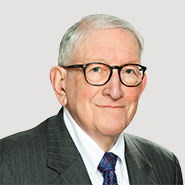