Nicholas D. Picollelli Jr. joins the firm after practicing asbestos law at a local Delaware office of a national firm.  Nick earned his J.D. and Business Organizations Law Certificate from Widener University Delaware Law School in 2016.  While in law school, he was a Senior Staff Member of The Delaware Journal of Corporate Law and member of the Moot Court Honor Society.  Following graduation, he completed back-to-back clerkships for the Honorable Charles W. Welch III in the Delaware Court of Common Pleas and the Honorable William L. Witham, Jr. in the Delaware Superior Court.

Nick received his undergraduate degree in History from Virginia Tech in 2012.  During college, Nick was a Cadet in the Reserve Officer Training Corps and Virginia Tech Corps of Cadets.  Following graduation, he served for seven years in the Delaware Army National Guard as a Military Police Officer, earning the rank of First Lieutenant.

Nick is admitted to practice in both Delaware and Pennsylvania.

Joseph F. Ecker joins the firm after serving as a Patent Examiner at the United States Patent & Trademark Office (USPTO).  Joe earned his J.D. from the University of Maryland School of Law in their Intellectual Property Law Track in 2018.  While in law school, he was an Executive Board Member of the Maryland Intellectual Property Student Association and judicial extern in the U.S. District Court for the District of Maryland for the Honorable Marvin J. Garbis, who was a founding member of the Patent Pilot Program for the District of Maryland. 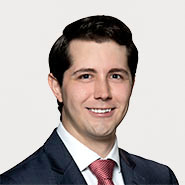